Raytheon applied to register the mark PAVEWAY for “Laser guided bombs” in 2004.  In 2005, Lockheed Martin filed an Opposition to the application claiming the term was generic.

The Opposition lasted nearly six years. The TTAB sided with Lockheed Martin in September 2011, finding the PAVEWAY mark generic for the goods.  The TTAB proceeding was not appealed by Raytheon.

NOTE: Raytheon in 2010 filed a newer application for a PAVEWAY logo (below). That application has been refused, for now because…. Applicant has been required to “disclaim” the descriptive or generic terms in it. 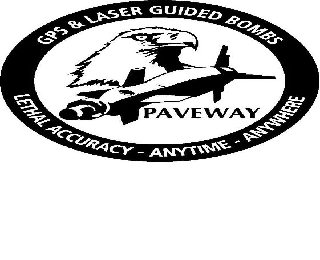